Data in the database is allocated from disk to memory, some data is read and then modified, and some data is newly created and allocated to memory. Such data should eventually be stored on disk to ensure that it is permanently stored. In this article, we will introduce one of the methods of storing data on disk in CUBRID to help you understand the CUBRID database.

The current version at the time of writing is CUBRID 11.2.

First of all, I would like to give a general description of the definition, purpose, and mechanism of Double Write Buffer.

What is Double Write Buffer?

When storing data on a disk, the Double Write Buffer generated in this way may prevent the corrupted DB page from being stored. The DB page-level corruption occurs for the following reasons:

In this document, it is assumed that 1 DB page existing in memory consists of 4 OS pages of Linux or Windows. When such a DB page is stored on disk, it is stored through a mechanism called flush.

The DB page of CUBRID is stored on disk as follows through the Double Write Buffer.

The process of storing in Double Write Buffer in memory can be described in detail as follows: 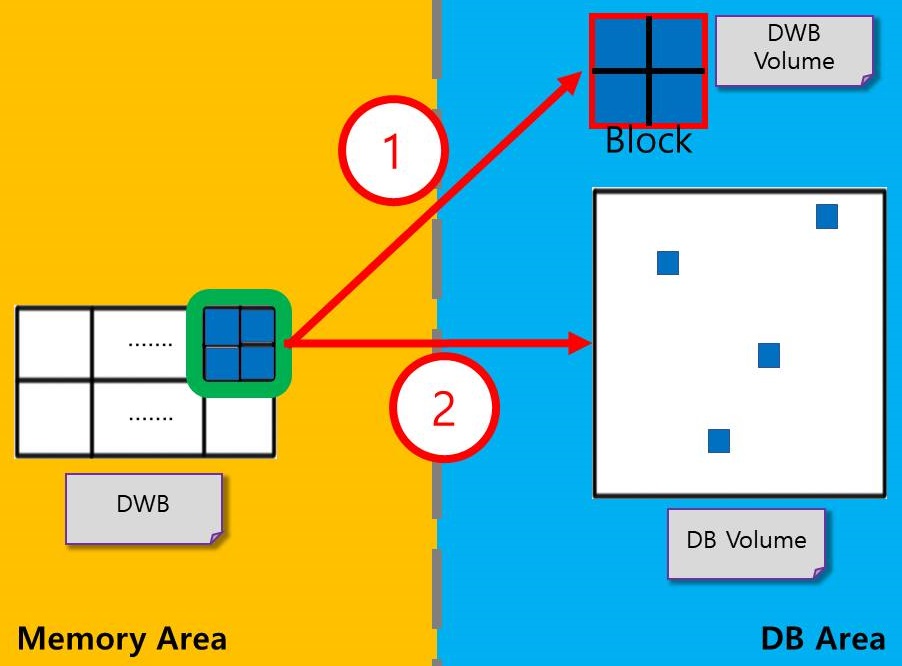 The process of storing DB page from the Double Write Buffer in memory to the DB on disk executes the following two processes in order:

In this case, in order to prevent the broken data from being stored on disk, the CUBRID server is stopped during the process of the server restart or creating a new Double Write Buffer, so that data not yet written to the disk is written.

When data storage in the disk internal DB fails

After allocating the Double Write Buffer stored in the DB to the memory, the page inside the block is compared with the page stored inside the DB. It prevents the DB page from being saved to the disk in a broken state by re-flushing only the broken DB page in the DB area.

When the DB page is stored in the DB

Through the above process, the DB page using the Double Write Buffer can be stored and the broken DB page can be prevented from being stored.